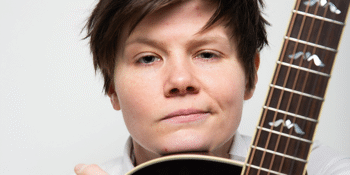 The Heritage Hotel, Bulli (Bulli, NSW)
Friday, 28 February 2020 6:00 pm
39 days away
18 Plus
Folk
Send this event to
She writes the sort of songs you want to pin the lyrics of on your bedroom wall, or on the office door, to remind you and everyone else who might read them what is important and true’ Buzz Magazine  ‘A millennial’s Billy Bragg’ Songlines ‘”Hello,” said Grace Petrie sweetly. “I’m a protest singer.” Murmurs of approval. “Actually I’m a socialist, feminist, lesbian, left wing protest singer…” The place erupted.’ The first lines of The Guardian review of Cambridge Folk Festival A folk singer, songwriter and activist from Leicester in England, Grace has been writing, recording and touring relentlessly for ten years and has won an army of loyal fans in the UK who pile into her shows to sing back every carefully placed word of every song. Her unique takes on life, love and politics, and the warmth and wit with which they are delivered, have won over audiences across the alternative, folk, political and comedy scenes, including on recent support dates to Australia’s Hannah Gadsby. She has also racked up tour supports with Billy Bragg, Josie Long and in 2019 supported Frank Turner on his UK arena tour.

She regularly tours sold out shows across the UK and has appeared at an eclectic genre-crossing mix of festivals Latitude, Musicport, 2000Trees, Shrewsbury Folk Festival, Greenbelt, Cambridge Folk Festival and in 2019 packed out The Acoustic Stage at Glastonbury Festival.   ‘She’s an effervescent charm-bomb of a performer, even alone with an acoustic guitar, as she was that night, singing about Theresa May. “We’re getting stand-up and music,” a woman next to me said.’ The New Yorker Her ground-breaking album, ‘Queer As Folk’, was released in autumn 2018.

What the media said about Queer As Folk: ‘Queer As Folk may well turn out to be one of my albums of the year’ Folking.com ‘She offers hope and solidarity, born out of absolute conviction and with no trace of empty sloganeering….this wake-up call is one to be both welcomed and wholeheartedly embraced.’ fRoots ‘An album of personal and political power, passion and perception, it is hugely persuasive proof that Petrie most deservedly earns her place at the table.’ Folk Radio ‘She’s the urgent, pulsing, compassionate talent this world desperately needs.’ The Observer ‘Just when you thought that what folk music needs right now is a strident left-wing female causing a bit of carnage, here’s Grace Petrie.’  **** Mojo