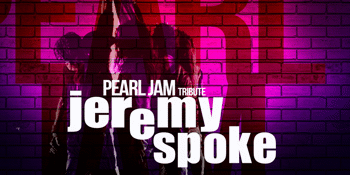 Jeremy Spoke - The Pearl Jam Tribute relives all the excitement, intensity and killer songs from one of grunge’s most legendary acts. Alive, Jeremy, Daughter, Even Flow, Better Man, Given To Fly and many many more. Get your tickets now for an unmissable night of explosive rock.

This is not a TV studio Josh!